<< Back to All Products

Citrulline Malate is a smart option, which results in improved endurance and tolerance to exercise.

THINK ABOUT TRAINING WITH THE SAME INTENSITY AT THE END OF YOUR WORKOUT AS YOU HAD WHEN YOU BEGAN.

So what is NO and what can it do for you? Nitric oxide is the cell-signaling molecule that has a part in regulating blood flow, oxygen delivery, glucose uptake, muscle firepower, and muscle growth. Obviously, the ability to control these physiological effects can be of tremendous value to athletes.

Citrulline's functions stem primarily from its ability to increase plasma levels of Arginine endogenously (in the human body). In addition, what is really so exciting about Citrulline is that it seems to increase plasma Arginine levels better than taking the amino acid Arginine itself. You read correctly!

Citrulline Malate is a smart option, which results in improved endurance and tolerance to exercise. It increases muscle strength by transporting the blood to the muscles faster and quicker and thus, improving the oxygen supply to the working muscles.

Lactic acid, for example, is a waste by-product formed when your muscles are in great action and undergo anaerobically (absence of oxygen) process. Increased pumping of oxygen means the elimination of lactic acid like waste substance. But when the oxygen supply slows down, the lactic acid gets deposited and causes an intense, burn like feeling, in the muscles.

Taking Citrulline Malate benefits our muscle health by accelerating oxygen supply to the muscles and thus taking care of the lactic acid buffering on a regular basis.

Ammonia also forms when bacteria in the intestinal tract breaks down protein. The point is that the more ammonia in your blood, the poorer your athletic performance. Citrulline Malate comes to the rescue once again by aiding in the elimination of amino acid byproducts of protein metabolism. Researchers also purpose that Citrulline Malate may help to eliminate the burn associated with lactic acid build up as well as reduce the negative effects of ammonia and bacterial endotoxins on performance. Demonstrations also show Citrulline Malate as having a protective effect against acidosis and ammonia poisoning. The metabolic actions of Citrulline Malate clearly explain the anti-fatigue properties and show great promise to its uses as a performance enhancer for athletes.

As we know, ATP is the energy fuel for our soring muscles, and an increase in the ATP production can improve muscle recovery and overall muscle performance considerably. By increasing the energy level (ATP production), Citrulline Malate can remove the muscle toxins even quicker. It means better muscle recovery and increased workout performance again.

This one benefit [among the others citrulline malate benefits] is a result of an increase in blood flow, activation of amino acids in the blood and increase in growth hormone for faster recovery post the workout.

One of the Citrulline uses is to improve the concentration of amino acids or make better use of amino acids as a source for exercising. It aids post-workout muscle recovery as well giving you a lean and cut body shape. You build muscle tissues.

Improved blood flow has other benefits too. The faster your body pumps oxygen, your whole body feels less fatigued and worn out. It helps you refresh mentally and make you feel fit and fine physically during the grueling workout hours.

Your brain too needs oxygen. Only through effective blood flow in the body, will you feel mentally and physically rejuvenated throughout the complete workout schedule every day.

It makes your workouts more pumped-up, comfortable and helps you recover faster so that you feel gym ready the next day. An increased concentration of amino acids, improved oxidization of muscles and removing the waste, do we need to say more on the better condition of your muscles, still? 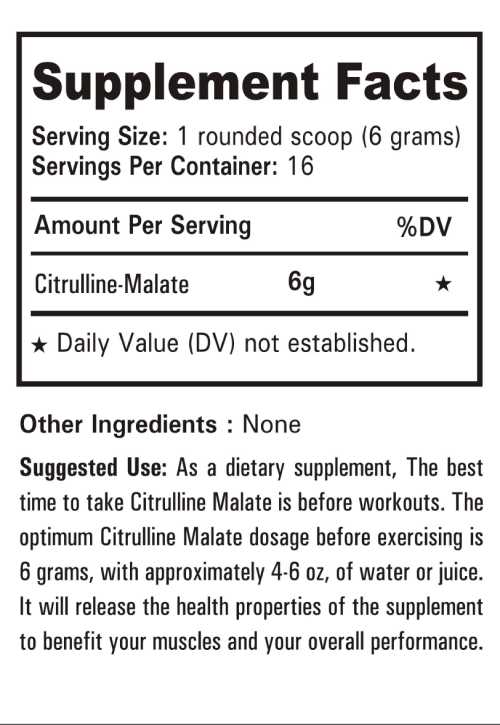 
papan podder
Tuesday, 07 May 2019 Good
Product is nice. Having pump while working out. Have been using since last three months. But it should come in higher amount package
Flavor:
Weight:
Quantity: